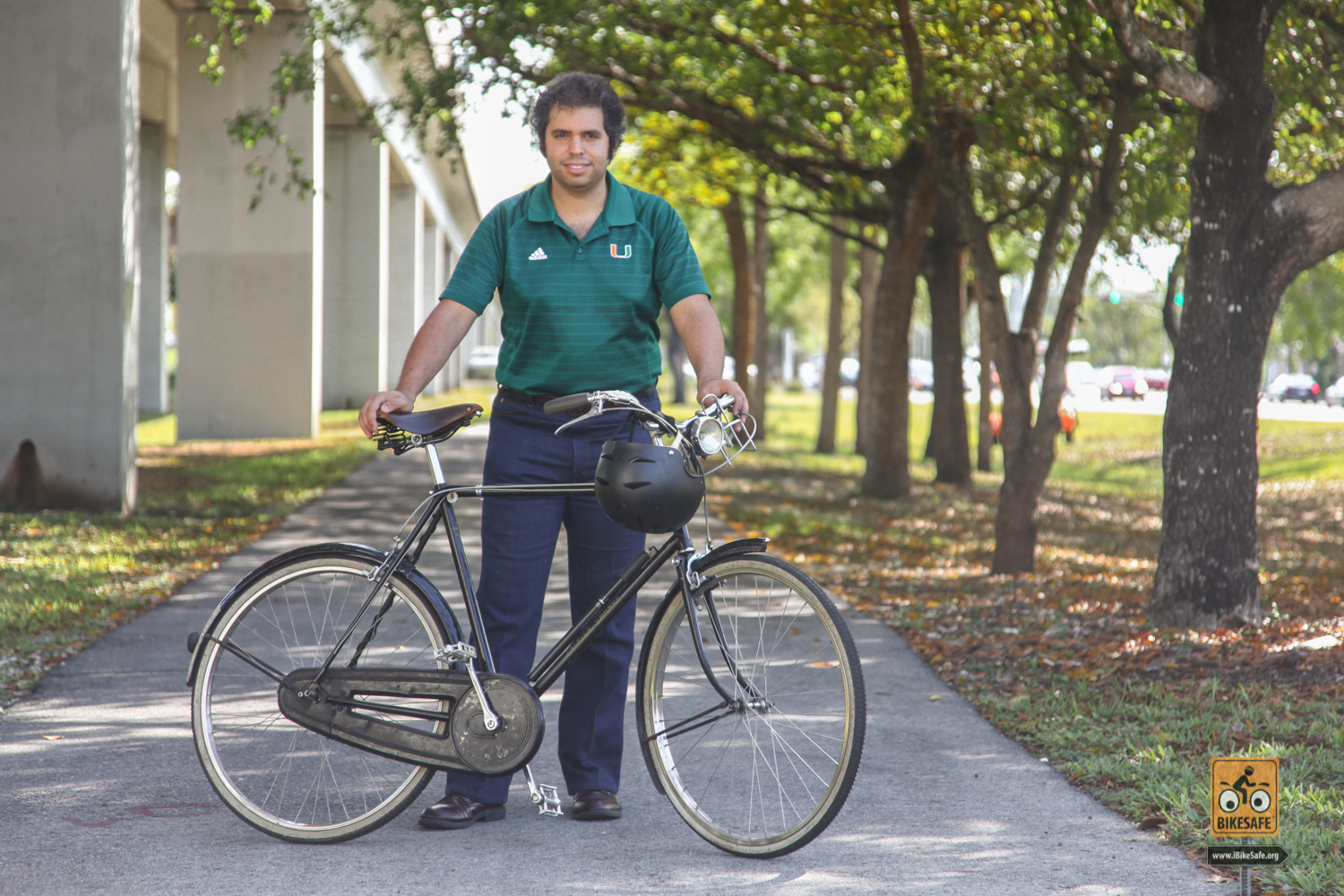 For Bike to Work Week, we’re taking a look at this year’s Florida Bike Month events as seen through the eyes of KiDZ Neurosicence Center staff member, Kurt Kaminer:

On one day of every year, traffic on US-1 gets passed by something that isn’t the Metrorail: A huge group of happy, cheery bicycle riders on the M-Path – a.k.a. The Underline.

This celebratory expedition is Miami-Dade County’s annual Bike to Work Day, an event where advocates and everyday bicycle riders come together to promote transportation options beyond the personal automobile.

As in the past, the University of Miami – including Green U, the UM Bicycle Club, and our own UHealth BikeSafe team – have been a part of the event to show our support. This year was no different.

Except, for the first time, I was chosen to represent BikeSafe on the ride itself.

And so I dusted off my favorite visual ode to European utility cycling – a 1951 Raleigh Sports with an enclosed chaincase – topped off the air pressure in each tube, and rode into the University Metrorail station, just as the sun crested the horizon.

A lovely variety of bicycles greeted my eyes as I rolled up. If anything, Bike to Work Day speaks of the amount of support the mode has gradually gained over the years with our local leaders. Though I often wish the turnout of everyday citizens on bicycles outnumbered public officials and advocacy organizations, it is understandable that building widespread support from the average resident takes time when better bicycle infrastructure isn’t in the public’s eye – yet.

After the usual speeches and celebrations were over – including welcoming Aventura as South Florida’s newest bike friendly municipality – we were asked to mount our bicycles.

It was about this time that I started to wonder about the relatively narrow M-Path filled two-abreast with the mile-wide “steer horn” handlebars of the loaner cruiser bicycles ridden by many participants. Mind you, I have ridden in groups with road cyclists before – including a fast-paced pack where you could balance an orange between handlebars for lack of distance – but never in what could be described as Miami’s singular interpretation of Copenhagen rush hour (or Amsterdam or Utrecht. Take your pick).

But before I could really wrap my head around this, a voice called out and we were on our way.

So we did. Quite a bit in fact, for drivers in US-1’s gridlocked morning traffic began honking. This was not the honking of the irate motorist though, but a celebratory cacophony combined with smiles and thumbs up through windows and sunroofs. We were being cheered on.

If there ever was a time to pitch the idea of bicycle infrastructure, this was it.

With fellow riders side-by-side, my fears about wide handlebars and weaving vanished as we rolled along in precision formation. I slowly made my way up and pulled ahead with one of Mack Cycle’s riders for a quick sprint to join the front of the group.

Yes, a “quick sprint” on a forty-pound, 67-year-old English roadster. Imagine a rider in full team kit in aero tuck being drafted by Mary Poppins in blue jeans.

I wish someone had photographed that.

During the time that we were spread out, I found the curb cuts to be rather exhilarating at speed, even though sidewalk accommodations generally translate into poor bicycle infrastructure. Case in point, I’ve been up and down these curbs under normal conditions, and the inclines are not fun when waiting at length for a signal to change. However, when the Miami-Dade Police Department blocks the whole intersection for you, who cares? After all, this ride helps to raise awareness of these shortcomings, such as the break in the path before Douglas Road. Here, the M-Path briefly becomes one with an – unfortunately – cracked Gables sidewalk.

These inconveniences aside, we were soon rolling towards Vizcaya on a section of the M-Path that truly feels like a homogeneous part of the East Coast Greenway. It’s luscious, it’s beautiful, and it’s unencumbered. Our pace is leisurely, but still quick enough to feel like good progress.

Then something wonderful happened: My mind went truly clear. Not blank, just clear – as if my subconscious decided to stop overthinking and take a break. It was a distinct feeling of peace intertwined with progress, to be one with fellow riders supporting bike advocacy. By comparison, my usual experience involves watching advocacy unfold on social media from behind a computer screen. While I enjoy the daily interaction and wisdom that our followers impart on bicycle-related matters, social media cannot compete with the satisfaction of taking part in something actually happening; a movement – quite literally – in motion.

Yet, if the prospect of riding to work in South Florida makes you think, “It’s too warm to ride in Miami,” consider the wind chill. Even at our relatively leisurely pace, it made for very effective air conditioning. Save for my shirt, I wore the same clothes I rode in for the remainder of the day and felt neither awkward nor uncomfortable.

What’s more, that shirt change may have been unnecessary had I not charged up the 2nd Avenue bridge as if I were gunning for the “King of the Mountains” title. This seemed to provide some amusement for onlookers, for as I struggled uphill, FDOT’s Jim Wolfe – sitting upright and distinguished on a Specialized e-bike – passed me like Mr. Rogers atop a rocket booster.

There is no doubt that the advancements in battery technology has turned e-bikes from overweight novelties into serious contenders for utility cycling.

But there is something else about utility cycling that you would never know until you’ve experienced it yourself: The empowerment of having the mechanism of your transportation sitting right in your office, ready at your absolute convenience. Having my Raleigh propped up next to my desk puts a slightly silly grin on my face, just like someone who just bought a new Corvette.

Only my grin comes much cheaper.