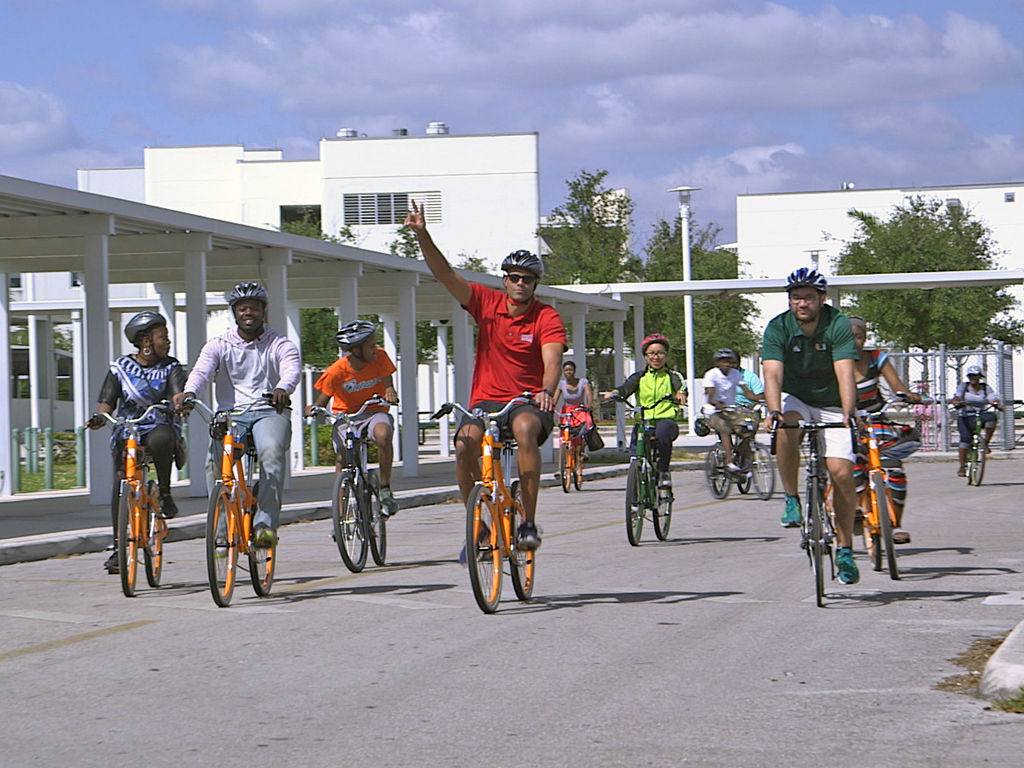 Since our BikeSafe Program was founded in 2011, we have had the good fortune to be a part of two bicycle giveaways hosted by legendary NBA players.

With the help of Giant Bicycles and local bike shop Mack Cycle, Shane Battier’s Take Charge Foundation and Ray Allen’s Ray of Hope Foundation were able to give away more than 60 bicycles this year to high school students in Miami and Homestead.

The trend of NBA superstars giving kids the gift of mobility has more recently received nationwide attention with the news of LeBron James’ new I Promise elementary school in Akron, Ohio; a partnership with the public school district.1

Amongst the benefits for students?

You guessed it – a new bicycle.

This is not by chance – bicycles are key to the program and James knows it. In relaying his youth experiences to The Wall Street Journal and The New York Times, James commented that his bicycle “was the only way to get around the city” during his childhood, and that this transportation freedom gave him the opportunity to “see a world laden of possibility.”2

But giving away bicycles is only a small part of what can be done.

Many American cities and municipalities face a major barrier to bicycle riding that directly affects the success of any bicycle giveaway: A lack of safe bicycle lanes, paths, and networks.

Thankfully, in the case of James’ hometown of Akron, bicycle lanes and complementary infrastructure is taken seriously – and not just because of his influence. The city has had a bicycle plan in place since 20093 and opened its first barrier-protected, dual-lane cycle track through the downtown core4 in 2016. More recently, they are reportedly working on plans to add another 16 miles of bike lanes5 to their existing 25 with the intent of creating a connected bicycle network.6

Preliminary renders of these new bike lanes also suggest that they will be buffered with planters as physical barriers, and wide enough to comfortably handle riders two abreast, aiding the social component of cycling and doubling as an area for riders to pass.

These are proper bicycle facilities – where a parent can feel confident that their child can take a bike ride in safety, without worry of careless drivers putting them in harm’s way.

This is not the case in other cities and that presents an inherent problem for kids, whether they have benefitted from a bicycle giveaway or not. Like anyone using a car to get from point A to point B, kids must be able to ride where they want to go too.

Even if a young rider does not mind braving the lack of bicycle lanes, that does not preclude the parents of said rider from putting their foot down to such an idea.

Thus, we circle right back to square one: A bicycle that cannot serve a meaningful purpose.

Think about the untapped potential. The charitable foundations of NBA players power these giveaways. These are people with the ability to mold opinion quickly, influence decisions in a community, and donate funds to get local government onboard.

Granted, this requires coordination with city government and a host of local – and sometimes state – traffic planning entities, but given the desired result, it is worth it. After all, the philanthropy of these NBA players is rooted in the understanding that a bicycle is how the young person experiences the world and broadens the mind. By working safe bike lanes into the package, these bike giveaways can turn into something truly special for neighborhood kids.

So let us think beyond the bike.

Let us see this as an opportunity for celebrities and their managers to think about collaborating with their local transportation planning organizations (TPO/MPOs) to build bike infrastructure. Safe bike infrastructure, like protected bike lanes and intersections that connect neighborhoods with schools.

Also, think of the opportunities for city planners. Here is a chance to learn what local kids think “a great place to ride a bike” should look like – with their favorite sports celebrities, no less!

Unconventional? Perhaps, but let’s not forget that earlier this year, a 2nd Grade class in Fort Lupton, Colorado, petitioned their city council for bike lanes to their school, and through their efforts, got their city to speed up the project.

After all, if we expect kids to “go outside and play,” they should have an opportunity to express where they enjoy going.

Is this a far more intensive exercise than your everyday giveaway?

But it is a direct investment in kids’ bicycle safety.