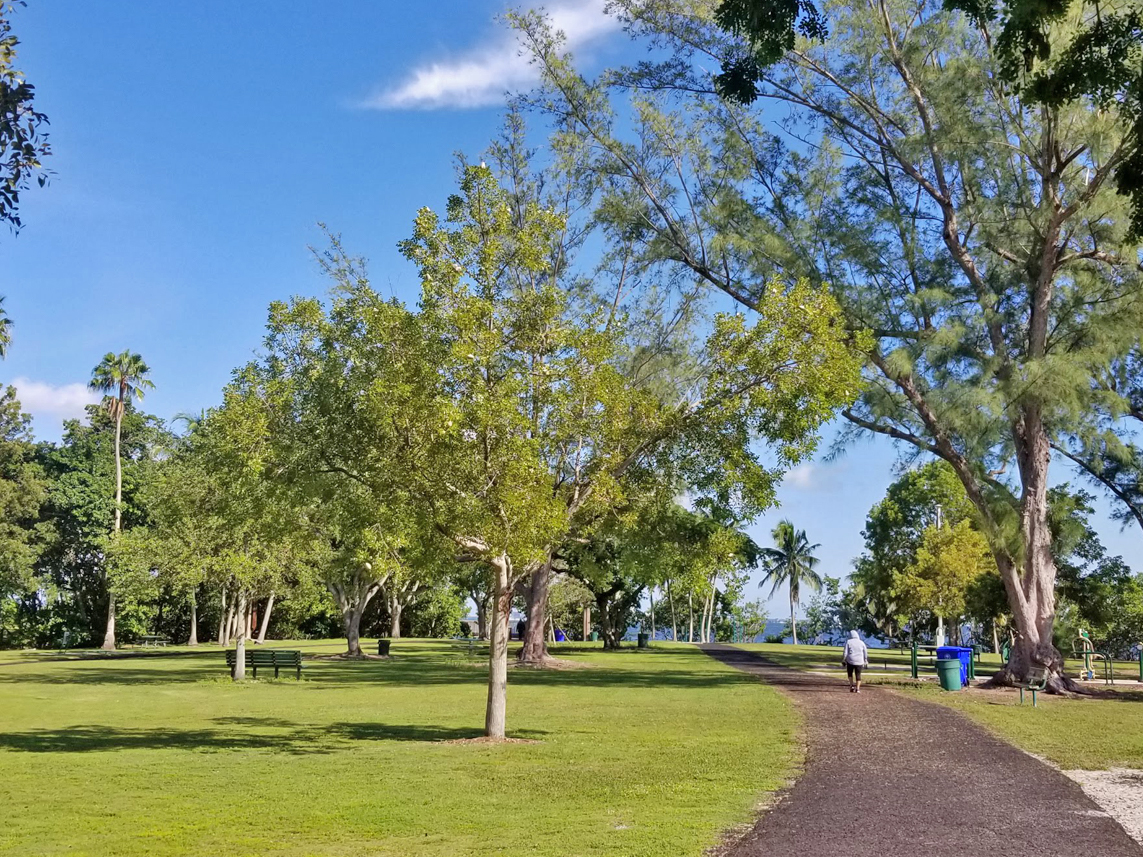 Not long ago, we found ourselves engaged us in a discussion on Twitter – as a follow-up to our sticky streets article – whether the best streets in history were intentionally built with human enjoyment in mind.

While we never did come to a conclusion,1 the discussion did bring something to mind: Parks remain one of the few areas in the urban core that exist specifically for humans’ well-being.

Yet, many parks are often surprisingly uninviting for kids, especially in comparison to the interactivity seen in some tactical urbanism projects involving pop-up parks. Thing is, even childhood imagination may have trouble making something of an empty lot and a bench, especially in an era where addictive smartphone games vie for our attention.

As such, our neighborhood parks could do with similar initiatives as sticky streets.

Many of you may be ahead of us here:

“That’s called a playground and you find them inside parks.”

In some ways, perhaps – but it is not that simple.

To begin with, not every city can afford to shower all their parks with an expensive, commercial playground set. Secondly, areas for play do not have to fit into the mold of erecting a wooden or steel castle and jungle gym.

Like tactical urbanism, making a park interactive for kids is about creativity rather than following conventional notions. Instead of confining ourselves to stereotypical ideas about playgrounds, let us embrace unstructured play and non-conventional offerings that can transform a park into a destination. 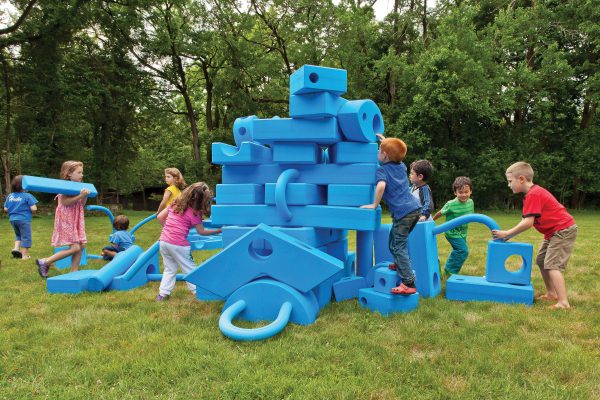 One thing we have seen in many pop-up parks are these blue Tinkertoy-like blocks. In fact, we would like to try them out ourselves (we are big kids at heart!).

While it would be superfluous to restate the kid-friendliness of construction toys, it is worthwhile to mention that these blocks are at the heart of unstructured, spontaneous play: Kids can do whatever they envision with them.

After all, ever since we discovered these, we have been daydreaming of making a giant marble run out of the half-crescent blocks.

True, the blocks are loose and could be stolen, but we have already explained that it is better to think positively of humankind than to stifle enjoyment based on an unproven fear. It cannot hurt to try these blocks for a while.

Oversized board games and sidewalk games: 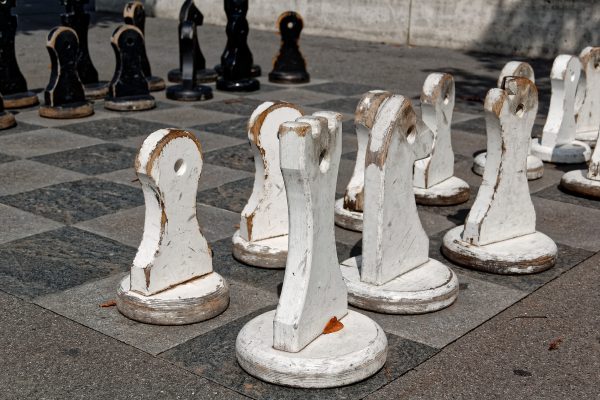 We are not exactly up on the science of what makes a huge version of a board game so inviting, but there is something especially fun about a huge version of checkers or Connect Four – and both appear to be commercially available. (Jenga is available too, but little ones may get hurt when the pieces finally tumble).

Checkers, in particular, may require nothing more than the pieces and some paint on an unused portion of tarmac, as does chess. The latter may be less kid-friendly, but parents and caregivers should have an opportunity to pass the time, and kids should have an opportunity to learn too (indeed, one of the booths we saw at the last Children’s Trust Family Expo was a youth chess club).

Like oversized board games, unused concrete can also be marked to encourage hopscotch, follow-the-line, and other similar games often created in sidewalk chalk.

We’ve also seen Scrabble, but good luck with the pieces for that! 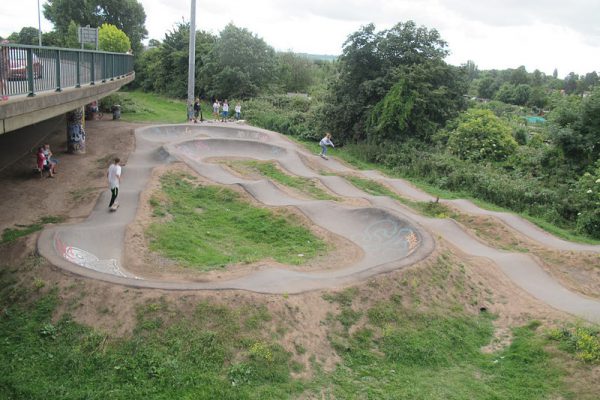 There are a few pump tracks in Miami – one in Haulover Beach, another in Goulds, and one in Key Biscayne which was so popular that one account states that kids were literally “scaling the fence” to get in.

Given the size of Miami, it would be nice to see more fee-free tracks – and it is entirely possible to scale one down to fit in smaller neighborhood parks. All it requires is a bit of hard packed dirt to get kids flocking from all around the neighborhood to enjoy the simple thrill of the “dips and whoops.”

Moreover, the excitement is fun for parents to watch. After all, witnessing your child having fun – and practicing impressive skills – is one of the best parts of parenting. 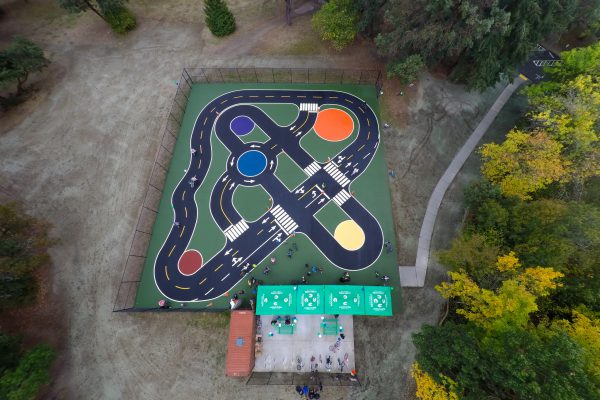 On a larger scale of sidewalk games, but still smaller than most playground equipment, are traffic gardens – a miniature replica of streets, complete with crosswalks, stop signs, and roundabouts. It is yet another way to get kids – and their wheeled toys – excited about going to a park, and it comes with the benefit of youth traffic education.

While not the cheapest of interventions, a traffic garden is still one of the least maintenance intensive of the concepts here, requiring nothing more than a pour-in-place rubber surface (preferable over tarmac for falls) and kid-sized street signs in its most basic form. In addition, since there is nothing loose in this design, there is nothing to steal.

Since roadway design is flexible, a traffic garden can also be worked into very small parks. Trees could even suggest areas to place roundabouts.

While we have had the benefit of witnessing a number of innovative park ideas, there is no substitute to asking the neighborhood kids what they want. Remember, they will be the ones that will make the final decision about whether they want to go to the park or not. Take their suggestions, no matter how wild or wacky, and sort out what can work.

At the end of the day, ensuring that our parks work at their best is about putting that “sticky” factor into them – just for kids. Like the excitement that the indoor playground boom created in the 1990s, it is entirely possible – and essential for our youth’s well-being – to turn the classic outdoor park into a destination that kids want to go to again and again.

What do you think? Are there any additional play opportunities or ideas you would add to this list? Share your thoughts in the comments section below.