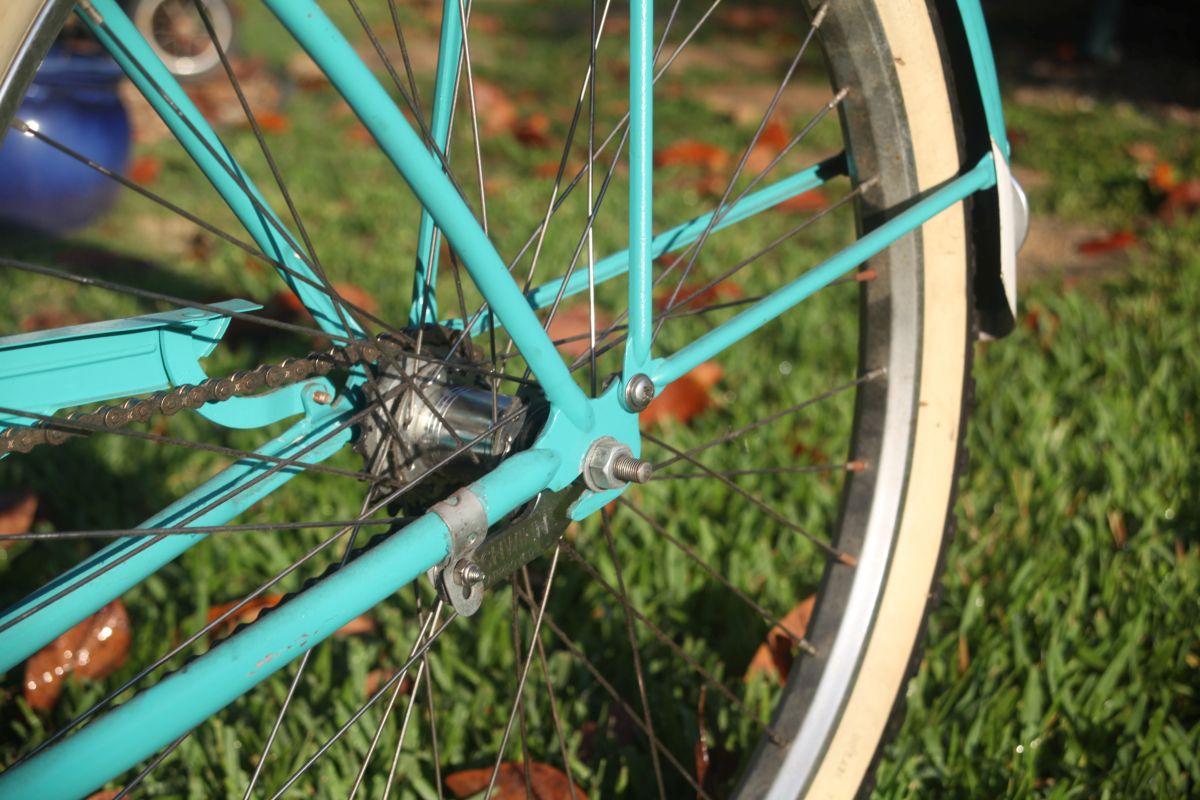 Let’s take a stand in the name of making bicycle riding easier for kids for National Bike Month: Let’s say “no” to mandated coaster brakes, a.k.a., the “foot brake.”

Thanks to the US Consumer Product Safety Commission (CPSC), the coaster brake is required on every new youth bicycle (“sidewalk bicycles” in CPSC parlance) sold in the US today.1 This means you cannot get a kids’ bicycle without one, unless you have a wheel built or re-laced.

“Wait,” you may say – “I learned on a coaster brake bicycle when I was a kid, and I didn’t have any problems learning how to ride.”

But you are not the one learning how to ride a bicycle anymore. It is an awful mistake to assume that a child shares the same abilities of our own experiences as children. Fact is, when we are young and trying to train our brains to pedal and balance at the same time, the coaster brake tends to get in the way.

A perfect case in point: There was a time when I thought coasters were a reasonable thing for a child’s bike, oblivious to my own experiences growing up.2 Then I became part of the BikeSafe program.

Part of our BikeSafe curriculum teaches the “power pedal” technique, which recommends that riders set a pedal at two o’clock, so that a single push of one leg can get one’s momentum – and balance – going. Most everyone who knows how to ride a bike already does this, even if that person is not aware that someone along the course of history gave that process a name.

This is easy enough on a bicycle with a freewheeling rear hub: Just spin the cranks backwards until the pedals are where you want them. Yet, getting the pedals set with a coaster brake usually means clocking the cranks before coming to a stop.

Since it is impossible to freewheel a coaster brake backwards, the only alternatives while stopped are to pick up the back end of the bike while fumbling the crank into the right spot – or duck walk the bike forward until the pedals spin into place. Both are a pain and the latter is unfeasible, as the bike’s gear ratio may require walking forward 10 feet to get the pedals where you need them.

Picking up the bike and kicking a pedal forward is usually the only feasible option of re-clocking a coaster brake.

While many training manuals quietly brush off this difficulty, it should not be overlooked. It is hard enough for the youth rider – or adult beginner – to become comfortable with both balance and acceleration without adding more complexity.

Have you ever tried to explain to a five-year-old that they have to move the pedals forward, but they cannot do so by spinning the pedals around backwards? They look at you suitably dumbfounded. From their view of life, why not? You might as well have asked them what they think about quantum physics.3

This is only half of the difficulty.

Functionally speaking, the coaster brakes installed on children’s bicycles – even the little ones with 16 and 12 inch wheels – are identical to the ones installed on adult bicycles, despite the CPSC’s different standard for youth “sidewalk” bicycle braking force.45 In practice, the reduced weight and momentum of a child on a small bicycle may give some children an advantage, but only so much.

In our experience, the youngest of children sometimes have trouble applying the necessary force to apply a coaster brake effectively, while many of them are too young or too excited to understand that the pedals and crankarms need to be clocked in just the right spot before braking to apply maximum stopping effort.

That’s right: Coaster brakes do not work well unless you’ve turned the pedals into the perfect spot to stop too. Since the length of the crankarms on a bicycle multiply your mechanical advantage – thus giving you the ability to expand the brake shoes inside the coaster brake with greater force – you have to engage the brake when the rearmost pedal is just a bit higher than the one in front. Doing so uses the length of the crankarm to apply controlled braking force with minimal effort.

Did that make sense? Now explain it to a child. (Or give up and try quantum physics again).

As such, coaster brakes are doubly ineffective because they require controlled decisions by the operator of the bicycle – something you cannot expect out of every young child – and can be utterly absurd to explain.

The CPSC should not be mandating a brake that makes riding difficult, especially when brake technology has made exceptional progress since the early 1980’s.

We now have dual-pivot caliper brakes that can stop a bike exceptionally well with relatively little force, while linear-pull brakes (generally “V-brakes”) provide so much mechanical advantage that even a child can squeeze a youth-sized brake lever and modulate their brakes easily.

Want to stop? “Pull the lever.” Simple as that.

This is far more intuitive than explaining the coaster brake shuffle: “Turn the pedals backwards when your leading foot is slightly down around the 4-o’clock position and stomp!”

Nevertheless, the CPSC continues to mandate the coaster brake for kids’ bikes. And when we do get kids bicycles with caliper brakes (combined with the mandated coaster brake), we often get the cheapest of stamped steel caliper brakes that look like a brake, but bend and deform more than they do anything to stop a bike.

These cheap brakes bend until the pads begin to clamp the tire instead of the rim. This leads riders into a false sense of security, as the extra friction between the pads and tire improves the abysmal stopping ability of these brakes. Few casual riders realize that this “improvement” is their brake pads tearing through the sidewall of their tire, destroying said tire. This also means that sidewall failure may happen while braking hard, the worst possible moment for equipment failure.

If anything, the CPSC should be banning every bicycle – both youth and adult bikes – that are imported into the US with these brake shaped objects.

Dockless bicycles already prove that it is possible to build an adult bike with decent quality V-brakes or hub band brakes – yet another option, though less powerful – for an acceptable cost per unit, so it should be reasonable to ask the same of bicycles designed for children.

We are not the first ones to suggest this. TheBikeDads.com have made the same argument on their blog, for many of the same reasons and then some: https://thebikedads.com/just-say-no-to-coaster-brakes/. All of these points are extremely valid, as are many of the comments to that blog post.

There is no reason why the CPSC should not get with the times, dispose of the outdated coaster brake regulation, and impose new minimums for caliper brakes, V-brakes, and band brakes that would make the 21st century youth bicycle a much safer and easier bike to ride.